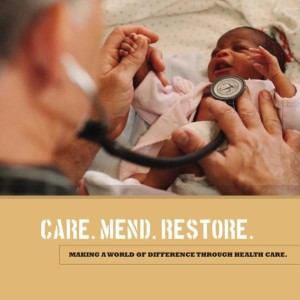 Mission medical workers want to see healing of the body, the child with malaria, the mother suffering with postpartum depression, the young man wounded in a fight. But there is another body we want to see healed, the body of Christ. In Acts chapter 15 we read, “And some men came down from Judea and began teaching the brethren, ‘Unless you are circumcised according to the custom of Moses, you cannot be saved.’ And when Paul and Barnabas had great dissension and debate with them, the brethren determined that Paul and Barnabas and certain others of them should go up to Jerusalem to the apostles and elders concerning this issue.” (Acts 15:1,2).  As Paul and others shared the good news concerning Christ with Gentile believers, a clash of cultures arose; the Jews argued that a true follower of Jesus must become Jewish, while Paul said ‘no.’

The Jerusalem council eventually settled the matter by a historic decision: God had been taking out a people for Himself from among the Gentiles, and it should not be man’s business to force them into a Jewish culture in order to follow Christ. (See Acts 15:13-29). The purpose was “in order that the rest of mankind may seek the Lord, and all the Gentiles who are called by My name.”

Just as there is a oneness and diversity in the human body, so there also should be both a oneness and a diversity of cultures in Christ’s body, the church. This has profound implications for medical mission work, as we want to be sure that Christ’s compassion is expressed in many cultures and many ways, not just through the dominant worldview and culture of Western medicine.  We want to see the ‘best of the West’ connecting with the best of the rest. Think of the cover of Time magazine this past year, where Dr. Jerry Brown, Liberian surgeon, trained in the joint mission program called Pan African Academy of Christian Surgeons, was honored.

Missiologist Andrew Walls says, “Traditionally, observant Jewish society and Hellenistic pagan society could be viewed as distinct entities, and the distinctiveness of each was marked at the meal table. Jews ate with Jews, Gentiles with Gentiles. The events reflected in Acts 15 produced two distinct Christian lifestyles corresponding to these ethnic and cultural divisions, the one for Jewish society and, the other for Hellenistic society. One might expect as a result that these would be two Christian communities, a Jewish church and a Gentile church. The Ephesian letter has not a dream of such an outcome: ‘In union with him [Christ] you too are being built together with all the others to a place where God lives through His Spirit. (Eph 2:22)’” The Cross Cultural Process in Christian History”

“Emphatically, there was to be only one Christian community. That community has become more diverse as it crossed the cultural frontier with the Hellenistic pagan world; and Christian obedience was tending to increase the diversity by developing parallel lifestyles that would penetrate and influence Jewish society on the one hand and pagan society on the other.  But the very diversity was part of the church’s unity. The church must be diverse because all humanity is diverse; it must be unified because Christ is one… The Ephesian letter is not about cultural homogeneity; cultural diversity had already been built into the church by the decision not to enforce the Torah.. Only together, not on our own, can we reach Christ’s full stature (Eph 4:13).”

And nowadays we have not just two, but innumerable cultures in the church. Walls says, “Like the old Jerusalem Christians, Western Christians had long grown used to the idea that they were guardians of a ‘standard’ Christianity..” But the church is now very diverse, and in that diversity can more fully express the glory of God and the sweetness of His Son Jesus Christ, who brings us together yet allows us to express His grace separately.

Good doctors and nurses don’t just treat the liver or heart; they are concerned for the effect of illness on the whole person. Good medical mission workers likewise are not just concerned for the effect of sin and injustice on one particular culture, but on the effect of sin on the whole. God is doing something beyond what we can ask or think, allowing His gracious gospel to transform the cultures of the world to express Christ in different ways yet in unity of Spirit. Medical missionaries — from various cultures — have background and training that is vital to the worldwide missionary task of the body of Christ.