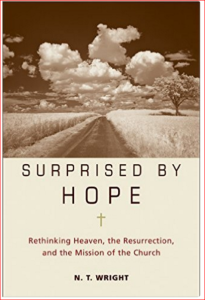 What would the resurrection have to do with the mission of the church? NT Wright makes a plea for us to connect the two.  Our modern assumptions about life after death seem to disconnect the reality of life in this world and the next, but the Bible does just the opposite.

“It has often been observed that the robust Jewish and Christian doctrine of the resurrection, as part of God’s new creation, gives more value, not less, to the present world and to our present bodies. What these doctrines give.. is a sense of continuity as well as discontinuity, between the present world and the future, whatever it shall be, with the result that the present matters tremendously.”

As a boy growing up in a major Christian tradition, I came to believe that what really matters is what is going on “in my soul.” My body seemed to be less important, less spiritual.  Wright shows us that this is so far from the truth. “In other words, the idea that every human possesses an immortal soul, which is the ‘real’ part of him, finds little support in the Bible,” he says.

The Scripture is clear that at the end of the present age there will be a resurrection of the bodies of the dead; see for example the book of Daniel where we read, “And many from those sleeping ⌊in the dusty ground⌋ will awake, some to ⌊everlasting life⌋ and some to disgrace and ⌊everlasting contempt⌋.” Daniel 12:2.

“Paul speaks of the future resurrection as a major motive for treating our bodies properly in the present time (1 Cor 6:14), and as the reason for not sitting back and waiting for it all to happen but for working hard in the present..”

Remember Jesus has risen from the dead, having conquered sin and death, and he came forth with a physical body, not unlike the body he had before death. Remember he still had (and has) the scars of the nails in his hands. And today he is still has a physical body, a kind of early “fruit” of what a the renewed earth will be like when he returns!

“It was people who believed robustly in the resurrection, not the people who compromised and went in for a mere spiritualized survival, who stood up against Caesar in the first centuries of the Christian era. A piety that sees death as the moment of ‘going home at last,’ the time when we are ‘called to God’s eternal peace,’ has no quarrel with power-mongers who want to carve up the word to suit their own ends. Resurrection, by contrast, has always gone with a strong view of God’s justice and of God as the good creator. Those twin beliefs give rise not to a meek acquiescence to injustice in the world but to a robust determination to oppose it. English evangelicals gave up believing in the urgent imperative to improve society (such as we find with Wilberforce in the late eighteenth century and early nineteenth century) about the same time that they gave up believing robustly in resurrection and settled for a disembodied heaven instead.”

It is not just our souls that are important but our bodies, both on earth now, before death, in the new heaven and new earth to come.  At Easter Jesus surprised the whole world by coming forward from that future into the present with His resurrection body. Let us trust and honor Him, who provides the only bridge between these worlds; this means obeying Him and being light and salt in this world around us!